And you're here for just one reason, aren't you?


Today I get to reveal the NEWS. The BIG NEWS I've been sitting on all week, and am about to explode with excitement.


Are you ready for THE NEWS?

Yes, The Immortal Rules has been optioned for a movie! 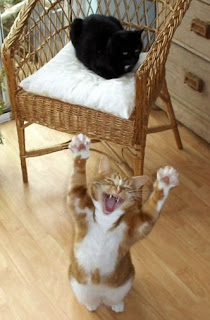 
Still, we have an OPTION.  The first step in getting THE IMMORTAL RULES to the big screen.


Here is the rest of the press release:


The Immortal Rules is set in a future world where humanity, decimated by a deadly virus, exists merely as a food source and slave class to an elite society of vampires. When a young woman, a survivor who dreams of the day humanity will rise up against their supernatural masters, is turned into a vampire, she is forced to choose between becoming what she despises or helping those who would destroy her.


Palomar principal Joni Sighvatsson was passionate about The Immortal Rules’ film potential and quick to secure film rights for the book and the Blood of Eden series. “It’s simply a great story with an electrifying heroine for the 21st century.  It makes the series an ideal subject for a film adaptation," said Sighvatsson. "Julie’s ability to familiarize the reader with this complex world in a few pages demonstrates the cinematic qualities of her imagination and complements my own sensibilities as a film producer."


Julie Kagawa felt that Sighvatsson was the right producer to partner with because of his tremendous track record for getting his films made and his passion for her books. "Joni does not take on a project unless he really loves it," Kagawa said. "He's thoughtful and established, and I know he's going to make a great movie that respects my material."


Sighvatsson has acquired a solid reputation in the movie industry. With more than 40 feature-film credits under his belt, Sighvatsson has worked closely with a wide range of talent, both in front of and behind the camera. The trademarks of his projects are the pairing of visionary directors—such as David Lynch, Kathryn Bigelow, Nicolas Winding Refn and Julian Schnabel—with strong material. This has led to a body of work that is rich and diverse.


Natashya Wilson, senior editor for Harlequin TEEN, is thrilled that Kagawa's novels are finally coming to the big screen. "Julie writes in such a cinematic way, I have seen her books as films from day one. Her fans have been clamoring for Julie Kagawa movies for a long time and I am so pleased that they are finally going to get their wish fulfilled!"

About Palomar Pictures
Palomar Pictures is an independent film production company based in Los Angeles, California.  Owner and principal Joni Sighvatsson is a veteran Hollywood producer whose filmography includes WILD AT HEART, BASQUIAT, KALIFORNIA and ARLINGTON ROAD.  Since being acquired by Sighvatsson, the company has produced such films as K-19: THE WIDOWMAKER directed by Kathryn Bigelow and starring Harrison Ford and Liam Neeson and BROTHERS directed by Jim Sheridan and starring Natalie Portman, Tobey Maguire and Jake Gyllenhaal.  Palomar Pictures’ most recent feature was the action thriller KILLER ELITE, starring Jason Statham, Clive Owen and Robert De Niro.  Palomar announced a financial partnership with Grosvenor Park LLC in the fall of 2011 for three movies, including an adaptation of Stephen King's Rose Madder.

So, that's my BIG NEWS.  I'm pretty stoked about it, if you couldn't tell.  I hope you are too, and I hope you share this with everyone you can, because the more people who are excited, the better the chances of seeing The Immortal Rules on the silver screen.