Wrapping up the year

Well, the year is almost over.  2013 was a bit of a whirlwind for me.  Tours, announcements, reveals, new hobbies, it was pretty crazy.  Here are a few highlights of 2013.

I attended my third Book Expo America this year and found it just as overwhelming, exciting, and exhausting as the previous two.  But, as always, it was a blast, and I loved it.  And, now as a veteran BEA-er, I have only one piece of advice for those planning to go to BEA for the first time: wear comfy shoes.  Seriously.

Me and my fabulous editor, Natashya Wilson, doing an interview together at BEA: 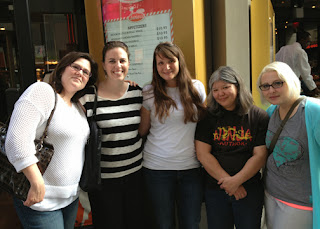 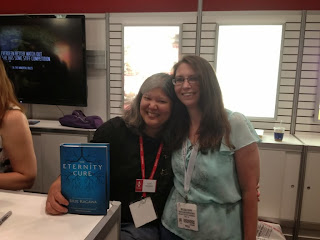 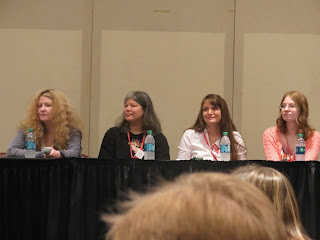 Also, Neil Gaiman was at BEA this year, aka the author who has been on my Bucket List for years, as in: Bucket List #1. Meet Neil Gaiman.  Sadly, his presentation was at the same time as my signing in the Harlequin booth, so Amanda Sun (who is also a huge Gaiman fan) and I were both very bummed that we couldn't be there.

BUT, then I had an idea.  Maybe I could meet him beforehand, if I could just get there early enough.  I had the plan all laid out in my mind: I would get there early, search for (okay, fine, STALK) the room until I saw his people (cause Neil Gaiman has to have people), and ask them very nicely if I could maybe shake his hand and tell him how much of an inspiration he is to me.  After all, my agent knows him and her agent-mate Pam is friends with both Neil and his wife, so I sort of know him by proxy, right?

Scheme firmly in place, on the morning of Neil's event, I got up, hurried to the Javits Center, and arrived at the room 4 hours early.  Not surprisingly, there were already a few people waiting outside the door, so I joined them and watched the line quickly grow into the hundreds.  I kept my eye out for what could be Neil's "people," and finally snagged a couple of ladies in his entourage.  I explained who I was and what I wanted, and they said they couldn't promise anything, but they would try.  Three-ish hours later, with the deadline to my signing fast approaching, I spotted Neil's editor and tried talking to her, but she said Neil was busy signing a thousand copies of The Ocean at the End of the Lane, and that I shouldn't get my hopes up.  And I get that.  Neil is huge, and overwhelmingly busy.  I knew this was likely a long shot, that I probably shouldn't even be bothering them with requests like this.  Still, I asked if he had even 10 seconds to shake the hand of a newbie author who is a big fan, or even listen to a thank you, that would make my year.  Her response?  "He doesn't have 10 seconds."

So, I didn't get to meet Neil Gaiman, which was kind of a bummer.  I did catch a glimpse of him in another room, surrounded by books, people, and cameramen, as I headed off to my own signing, and wished him all the best.  I hope that someday I will get to meet him, face to face, but until then, he remains at the top of my Bucket List.

The #YeahYA tour with Katie McGarry and Aimee Carter.


The #YeahYA tour was my first tour ever, and I got to travel with two fabulous authors, Katie McGarry and Aimee Carter.  We were to hit seven cities in ten days, and if this sounds exhausting, that's because it WAS.  Completely, overwhelmingly exhausting.  And since I don't sleep in new places very well, there were days that I showed up to a signing on zero hour's sleep, and the event quickly took a nosedive into slaphappy.  Which made it even more fun (and hilarious), but there were days I was running on caffeine and fumes and not much else. 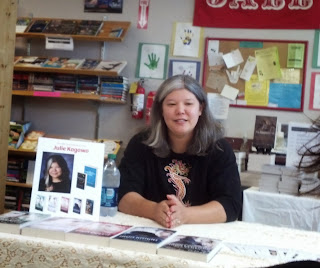 Do I look a bit zombie-fied in this pic? I probably am.


Still, the tour was absolutely a blast.  I had so much fun, met so many wonderful people, and my tour-mates and I quickly forged the unbreakable bond that comes from being in airports, hotels, and new cities 24/7.  We had some truly unforgettable adventures (like being stuck overnight in Toronto after a massive storm that crippled half the city. We were in the airport when the power went out and the airport lost Katie's luggage, and every single flight was cancelled.), stayed at some awesome hotels, met our amazing fans, and ordered way too much room service.

And if I had the chance, I'd do it all again. 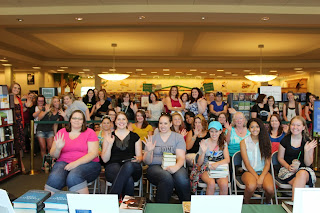 Thanks to everyone who came to see us!  You are the reason we write.


So, while writing three books this year, I found that I needed something else to do, something to keep my mind off plot and character and let my mind relax, or I would drive myself up a wall.  Strangely enough, I turned to a hobby I enjoyed as a kid, making cute clay figurines.  This let me be creative in a totally different way, and I really enjoyed it, though my first attempts looked like deformed gumbies.  Soon enough, I had a whole shelf full of figurines and they were quickly taking over the room. 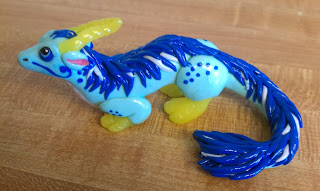 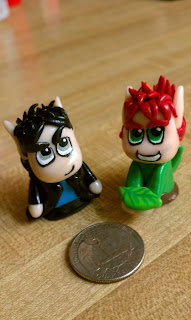 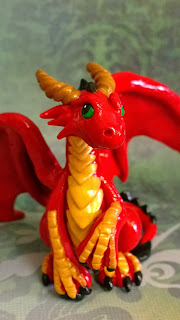 I put a few pics up on my blog, just to share what I'd been doing, and was surprised by the amount of people who asked if I sold them.  This was also the first time I heard of Etsy, a site where you can sell your handmade art.  After doing a little research (and wondering if people really WOULD buy any of my figurines), I opened up an Etsy shop, and the rest, as they say, is history.

More pics of clay stuff at my Esty shop here.


By far the most exciting thing that happened to me this year was the unveiling of my new series, a subject very near and dear to my heart.  I've had this idea since I was a kid, and wrote the first rendition of it in high school.  The story has changed, the plot has evolved, but the two main characters have stayed with me their whole life, and I'm thrilled I finally get to tell their story.

For those who know me, the subject matter shouldn't even come as a surprise.  It is, of course, about: 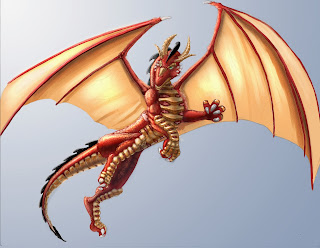 Dragons!
The reveal of the new series took place in New York City, and I was lucky enough to share a room with Jennifer L. Armentrout, the author of the Lux series and who joined the Harlequin TEEN team very recently with her new book, WHITE HOT KISS.  Jennifer is amazing and funny and I can't wait for her new series. 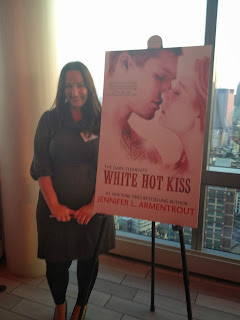 There was a party with food and drinks and lots of awesome people, and a magnificent view of New York City in the background.  I couldn't have asked for a cooler place for the big reveal. 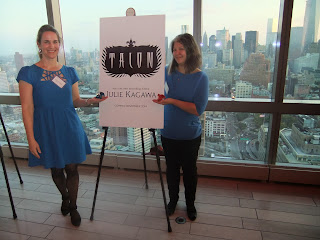 Me and Natashya revealing TALON. I swear we did not coordinate our outfits beforehand.
﻿
﻿
Even more exciting is the fact that the first book was optioned for film by Universal Pictures, so MAYBE, just maybe, you might see modern day dragons soaring across the screen sometime in the future.  Fingers crossed.  And be on the lookout for the first book in the series, TALON, sometime next year.  The dragons are coming! 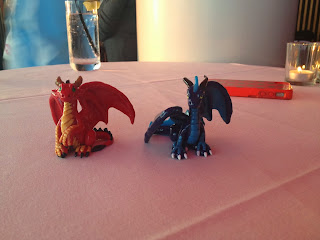 Ember and Cobalt came to the party, too!
﻿
So, those were the highlights of the year for me.  Like I said, 2013 was pretty awesome, but I am looking forward to 2014.  Who knows what the next year will bring?  I personally can't wait.
Wishing you all a safe and happy New Year!  Thank you for all your support.
-Julie Kagawa﻿
﻿

Can you believe it's almost Christmas?  Where has the year gone?  I hope that, wherever you are, you have a wonderful holiday filled with cheer, family, and love.  2014 is going to be spectacular, I can feel it.
So, here are two tiny dragons to wish you all a Merry Christmas.  Could they be the chibi versions of a book that's coming out in the future?  Perhaps they are.  You'll have to wait and see.  ;-) 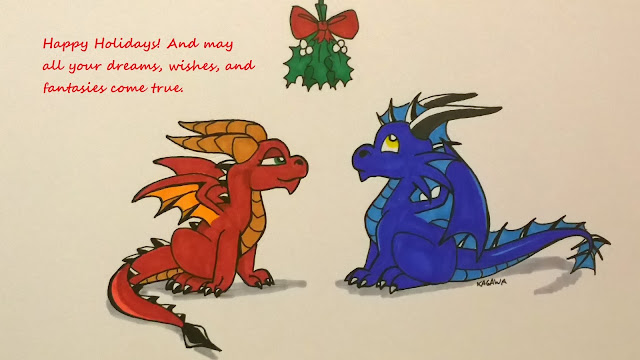 How about a small FOREVER SONG teaser?  This is part of a snippet in the back of The Iron Traitor.  Warning: it's a bit dark.  Do not read if you're squeamish in any way.


The smell of blood grew thicker once we were past the wall, though nothing moved on the narrow path that snaked between houses.  The flimsy wood and tin shanties were silent, dark, as we ventured deeper, passing snow covered porches and empty chairs.  Everything looked intact, undisturbed.  There were no bodies.  No corpses mutilated in their beds, no blood spattered over the walls of the few homes we ducked into.  There weren't even any dead animals in the tiny, trampled pasture past the main strip.  Just snow, and dark, and emptiness.


And yet, the smell of blood soaked this place, hanging thick on the air, making my stomach ache and the Hunger roar to life.  I bit it down, clenching my jaw to keep from snarling in frustration.  It had been too long.  I needed food.  The scent of blood was driving me crazy, and the fact that there were no humans here made me furious.  Where were they?  It wasn't possible that an entire outpost of mortals would up and disappear without a trace.


And then, as we followed the path around the pasture and up to the huge barn at the top of the rise, we found the townspeople.


A massive, barren tree stood beside the barn, twisted branches clawing at the sky.  They creaked and swayed beneath the weight of dozens of bodies, hanging upside down from ropes tied to the limbs.  Men, women, even a few kids, swinging in the breeze, dangling arms stiff and white.  Their throats had been cut, and the base of the tree was stained black, the blood spilled and wasted in the snow.  But the smell nearly knocked me over regardless, and I clenched my fists, the Hunger raking my insides with fiery talons.


"Well," Jackal muttered, crossing his arms and gazing up at the tree, "isn't that festive."  His voice was tight, as if he too, was on the edge of losing it.  "I'm guessing this is the reason we haven't found a single bloodbag from here all the way back to New Covington."  He growled, shaking his head, lips curling back from his fangs.  "This guy is really starting to piss me off."


I swallowed the Hunger, trying to focus through the gnawing ache.  "Why James, don't tell me you feel sorry for the walking meatsacks," I taunted, because sometimes, goading Jackal was the only thing that kept my mind off everything else.  He snorted and rolled his eyes.
"No, sister, I'm annoyed because they don't have the decency to be alive so I can eat them."

Allison's final story will be released next spring.  What do you hope will happen in THE FOREVER SONG?