Ash and Puck, come to life (sort of)

I'm back from the Iron Knight signing.

It was great! Thanks to everyone who came, especially those who drove so far to see me. It was wonderful meeting you all.

But, the coolest part of the signing, were these guys. 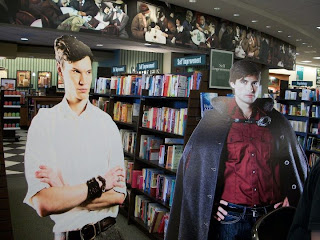 I knew there would be life-sized figures of Ash and Puck at the signing, but it was still pretty awesome to walk in and see them staring at you. Or rather, at each other. (Puck seems to be giving Ash the evil eye.)


Here are a couple more pics. 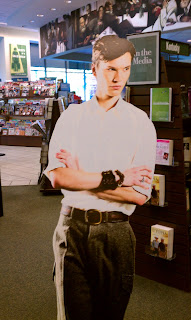 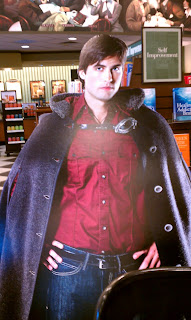 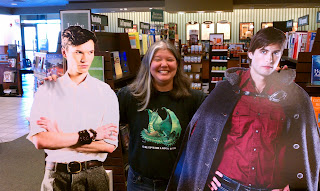 There were also goodie bags with a never before seen picture of Ash, Meghan, and Puck together. I got to take home the big poster of them. *happy* 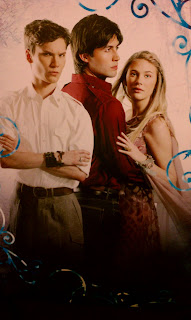 I love this pic.


So where are the boys now, you wonder? Don't worry, they're safely in the corner of my office, where they shall remain forevermore, my preciousssssssssssssssss. 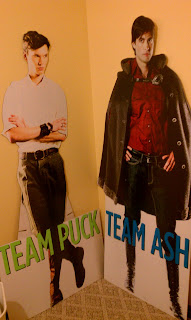 So, the #IronKnightParty was a blast.

I don't know how many people showed up for it, but the screen was rolling by so quickly you couldn't keep up with all the comments. My laptop froze and crashed only once during the whole two hours, which I consider a win. Such is the case with these twitter parties, and I love them because they're so fast, furious, and fun.

Some highlights of the party:

The Iron Knight playlist was revealed, which I shall post here for your enjoyment. I wish I could post the music, but Playlist.com has the bad habit of dropping songs on my list or removing links. So I'll post a YouTube vid of my favorite song on the list, which I think captures Ash's struggle perfectly.


But the highlight of the party (and what many people came for, I think), was Ash's Letter to Meghan. There was much speculation about what was in said letter, which led to some hilarious poems and notes as everyone waited for the reveal. Such as:

"Roses are red, violets are blue, Meghan is mine, Puck get a clue." -Team Ash

"Roses are red, violets are blue, eff you Ice-boy, I kissed her too."


LOL, but then the real letter was unveiled. And while I can't post it on my blog just yet, I will share the link to the HarlequinTeen FB page where you can unlock the download. Go check it out. They made it all pretty and stuff. :)


So now we were getting close to midnight, and the official release of The Iron Knight. But Harlequin Teen had one last little surprise in store. (Actually, there's nothing little about it.) A photo contest, running from now to November 18th, where you take a picture of yourself and an Iron Fey book in a creative, faery-ish way, and post it to their FB page. The prize?

A signed copy of The Iron Knight, and A TRIP TO NYC TO MEET ME.

Sound cool? Want to go to New York City? Then follow this link to enter the contest and good luck!

Whew, I think that's everything! If you have questions about the letter or the contest, please don't inquire here, I won't be able to help you much. Ask Harlequin on their Facebook Page or on their twitter account @HarlequinTeen. Hope to see one lucky winner in New York City soon!

And if you happen to be anywhere in Louisville, KY tonight, I'll be having the second Iron Knight launch party at the Summit B&N. Come by and see me, grab a goodie bag, and have your pic taken with the life-sized cut-outs of Ash and Puck! They'll be staring over my shoulder the whole time. ;-) 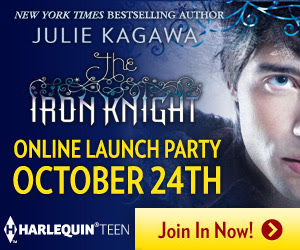 There will be contests and Q&A and prizes, special guests and exciting announcements, secret reveals and more.

Including this. ASH'S LETTER, a note he wrote to Meghan before he left for his journey in The Iron Knight. It's never been seen before, but tonight it will be revealed. 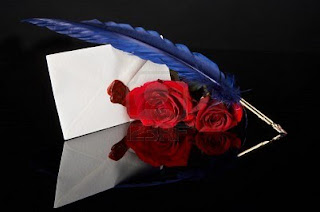 The party starts at 10pm and goes to 12 midnight, EST. If you're unsure how to join, check out TweetChat and use the hashtag #IronKnightParty. It will take you to the party. In fact, this should take you right to the room. 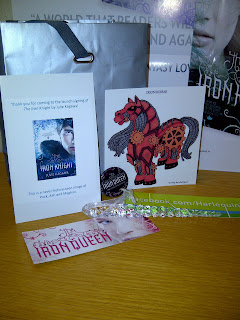 The last Teaser Tuesday plus an Exciting Announcment

In exactly one week, The Iron Knight will be released into the world. 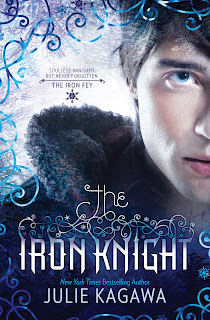 In light of this news, I must report that this will be the last teaser for The Iron Knight. Because hey, next week you won't need to be teased anymore, right? You'll have Ash in your hot little hands. ;-)

(If that sounds dirty, I don't apologize. Puck made me say it.) 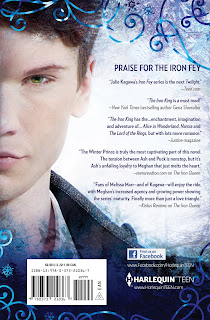 I also have an Exciting Announcement, so please sick around after the teaser for the news.

So, here we go. The final Iron Knight teaser; short, simple, and sweet. 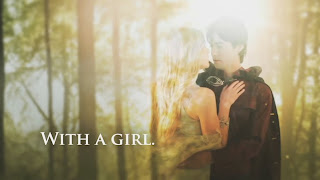 She trailed her fingers over my bare chest and I shivered, almost frightened by how much I loved this girl.


There. A shirtless Ash. You've been waiting for it, right? Lol, now you'll just have to get the book to see how that plays out. :P


*Snaps fingers* Wait, wait, don't leave yet! I still have an announcement!


I'm doing an Iron Knight launch party in Louisville! (I know, finally, right?) It's being held at the Summit Barnes and Noble, starting at 4pm and going to whenever. I'll be signing copies of The Iron Knight, plus there will be goodie bags, drawings, prizes, and some never before seen things.

(Also, there are rumors that there will be life-sized blow ups of both Ash and Puck at the party, too. So if you wanted your picture of either of them, now's the time!)

For more information, go here. Spread the word! I'll see everyone in a week!

So, New York City ComiCon was fast-paced and awesome and exciting, and I have some great pictures and stories to tell involving the flu and costumes and Bumblebee from Transformers. But I will get to them later.


The Iron King made #5 on YALSA's top ten! How incredibly awesome is that? I can hardly believe I'm up there with authors like Suzanne Collins and Cassie Clare. Eep, I say. Double eep.

Here is the full list, and congrats to the winners and the nominees. If you happen to talk or tweet at one of these authors, be sure to congratulated them, too!

4. I Am Number Four by Pittacus Lore (HarperCollins)

9. Before I Fall by Lauren Oliver (HarperCollins)

Tomorrow I'm off to New York for ComiCon!

Wheeeeeee! Geek lovers dream. I hope to see lots of cosplay and zombies. 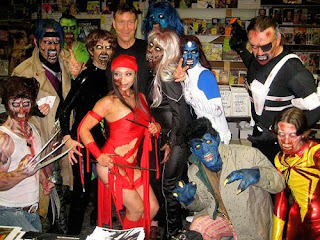 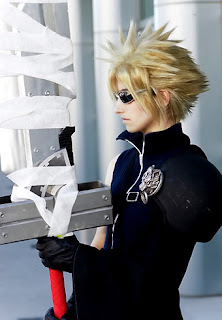 
Oh, and you can also meet me there on Saturday, October 15th, at Harlequin's booth #2021 from 2-4. I'll be signing books, and anyone who comes in costume can be entered to win a cool Iron Fey swag pack.

Plus I will probably take your picture.

(And if someone comes as my favorite video game character or comic book hero, I will give them a prize. No, I'm not saying who they are.)

Sorry. I blame the brand new novel I started today. You know when you sit down and type the words "Chapter One" and then think: aaaaaaaaaaaaah!

Yeah, that was me today. 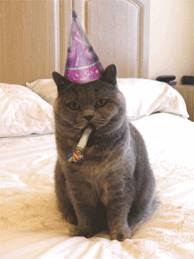 
Okay, you're probably here for the teaser, right? Wow, only three teasers left until Iron Knight is out. Time flies. (Or crawls, depending on how you see it.)

On with the teaser.

I drew my sword. “Puck, get some light back there, now.”

Faery fire exploded overhead, a flash of emerald green, lighting the passageway behind us. In the flare, hundreds of shiny, eight-legged creatures scuttled back from the sudden light. The tunnel was full of them, pale and bulbous, with bodies the size of melons and multiple thin legs. But their faces, elven and beautiful, stared down at us coldly, and bared mouthfuls of curved black fangs.


Oh yeah, and don't forget this, either. 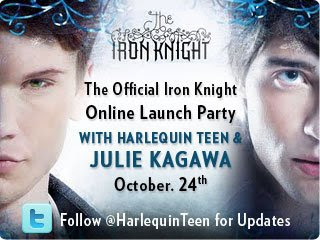 Check here for details. I'll be there wearing my Grimalkin pjs!
Posted by Julie Kagawa at 9:18 PM 25 comments:

And now, for something totally random...

I blame Beth Revis for having the link to this "Create-a-pony" site on Deviant Art. Guess what I was doing all afternoon, instead of editing?

So, if you've ever wondered what the characters from The Iron King would look like as ponies, here ya go. 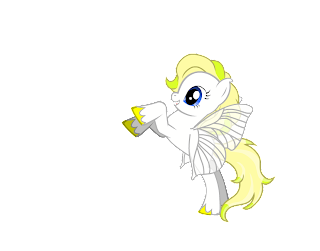 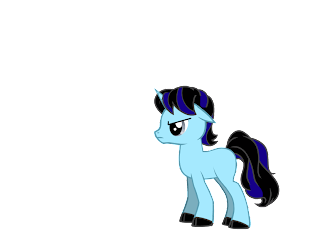 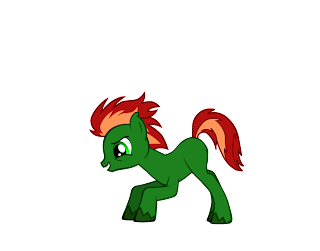 Teaser Tuesday and a brush with malicious plants

So a couple days ago I was out working in the yard, and as I was picking up pine cones from beneath the trees, I happened to look around and discovered I was surrounded by poison ivy. 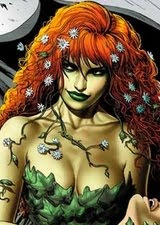 Not that Poison Ivy. 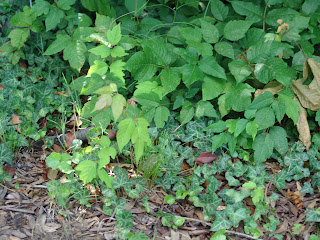 
I got out of there quick, and thought I had avoided contact with any of the plants.

Yesterday morning I woke up with my left eye swollen completely shut. Which made it very difficult to write, edit, tweet, or anything involving the use of one's eyes. I spent the day in bed hugging a box of Benedryl.

Today its a little better, though I still look like the Hunchback of Notre Dame, or that guy from Goonies. (Remember him?) But, it is Tuesday, and neither rain nor sleet nor sadistic vegetation will keep me from posting.

So, here's today's teaser. Its short, but its all I can manage today. Now, back under the covers I go, to dream of taking a machete to the vines beneath the pine trees. *Whack whack*

"Having second thoughts?" Puck's voice was soft and dangerous, a far cry from his normal flippancy. "I thought we'd put this behind us for now."