No Teaser Tuesday today, but I have something even better.

If you didn't know already, author Gena Showalter wrote this awesome book called TWISTED, the third book in her Intertwined series. TWISTED is set to release at the end of this month, and to celebrate, does she have an opportunity for you! 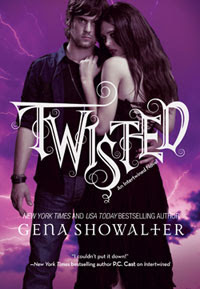 His vampire girlfriend might have brought him back to life, but he's never felt more out of control. There's a darkness within him, something taking over…changing him. Worse, because he was meant to die, death now stalks him at every turn. Any day could be his last.

Once upon a time, the three souls trapped inside his head could have helped him. He could have protected himself. But as the darkness grows stronger, the souls grow weaker—just like his girlfriend. The more vampire Aden becomes, the more human Victoria becomes, until everything they know and love is threatened.

Life couldn't get any worse. Could it?


So, now that you know what an awesome book TWISTED is, on with the totally awesome contest:

How do you define the “Best Night Ever?” Does going on a mini shopping spree for a chic new outfit, dinner out with your bestie and seeing your favorite music act live in concert sound like it would do the trick? If so, read on!

To celebrate the release of, TWISTED, the third book in her Intertwined series featuring Aden Stone, Gena Showalter is rocking out with her author buds on The TWISTED Tour. The tour spans almost two weeks and 11 author websites, including this one, from August 22nd through September 2nd. The Grand Prize winner will be awarded all the essentials for a perfect night out, including:

A Second Prize winner will receive an autographed set of Gena’s Intertwined series, including INTERTWINED, UNRAVELED and TWISTED.

HOW TO PLAY: Visit The Knight Agency blog and check the tour schedule. Visit the sites of each author on their assigned tour date and locate the concert ticket image.

At the end of the tour, fill out the form on the aforementioned TWISTED Tour contest webpage by matching the images you found to the authors’ websites that they were located on before Sunday, September 4th at 11:59pm ET. The winners will be randomly drawn and notified on or around September 9th, 2011.


I am seriously envious. Anyway, here is your image for the contest. Good luck to you, and don't forget to visit the other author blogs on their assigned days to win.