As some of you know, my orange kitty, Sniper, had been having some eye issues for awhile. A couple months ago, his eye became cloudy and filmy, to where it looked like cotton balls were floating around his pupil. We took him to our regular vet, who at first thought it might be FIV or Feluk (it wasn't, thank God!), but when those tests came back negative, he sent me to an eye specialist in Louisville.

After examining poor Sniper, the specialist said it his eye issues could be caused by any number of things: fungal or bacterial infections, cancer, ect. She gave me some drops to put in his eye (three times a day), and told me to check back in a couple weeks.

Sniper was not happy about the drops.

When he went back, however, his eye pressure had dropped from 80-ish to the 12-15-ish it was supposed to be at. We were all very happy, and the vet said to keep him on the drops for another month until they ran out, then to bring him back to see if he was better.

Unfortunately, he didn't get better.

His eye pressure had skyrocketed back to 80 when he returned, and the red cloudyness had gotten so bad that he could no longer see out of that eye. So, with few options left, we decided that the best thing would be to have the eye removed. Then the eye could be sent to a lab, and we could figure out for sure what was going on.

So, a little sadly but knowing it was necessary, we made the appointment.

Sniper went in for eye surgery two days ago and, happily, he is doing perfectly fine. The vet informed me that a one-eyed cat could see just as well as a two-eyed cat, and they really don't miss their other eye at all. Sniper seems completely normal now, and though he does look a bit like a bedraggled pirate, he doesn't seem to even notice he is missing something. 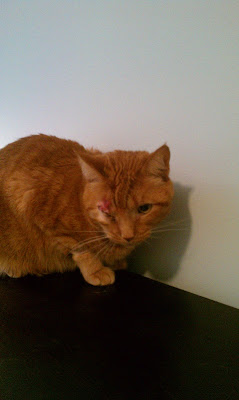 Here is Sniper the day after surgery. His eye socket is a bit bruised, but that's normal, according to the vet. The reason he looks so annoyed is that I'm forcing him to stay still to take a picture, and he was looking for a way to leave. We did the whole "hold still until the human is just about ready to take the picture and then dart away" dance for about five minutes before I finally snapped this shot.

Sniper goes in to have his stitches removed next month. Thanks for all your concern and well wishes. Will continue to update his progress on twitter; you can follow me @Jkagawa if you want to see how he's doing.
Posted by Julie Kagawa at 10:29 AM