A tribute to Sniper Cat.


It is with great sadness that I announce that our wonderful orange, one-eyed kitty Sniper lost his battle with cancer today.  He was diagnosed with Lymphoma earlier in the year after we noticed his eye getting cloudy and swollen.  His eye was removed, and we'd hoped that the cancer was contained soley in the eye, but a couple months later lumps started appearing on his chest and face, and we knew his time was about done.

He was put on medication to slow the spread of the cancer, but we knew it was only buying him time and that eventually, we'd have to let him go.  He had one more good month full of love and treats and spoiling, before his health went rapidly downhill  and he began to deteriorate.  Today, we made the desicion all pet owners dread: to end his pain and let him go gently into that eternal sleep.

I cried the entire time.


But, as the great Dr. Seuss said: "Don't cry because its over, smile because it happened."  And though we will miss Sniper cat terribly, we had six wonderful years with him, and he will always be in our memories.  So this is a tribute to our awesome one-eyed kitty who loved life, and a reminder to love those furry family members who share your world. 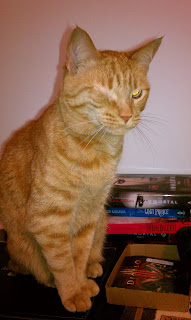 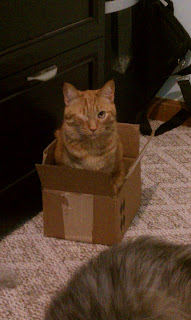 Sniper in his box. 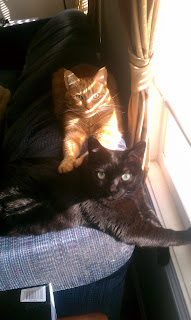 An early pic of Sniper before he lost his eye, with his best friend, Shinobi.