Found an odd white furry bug on my wall today.  Took a picture but it was so tiny, its hard to see.  Click on the pic to enlarge. 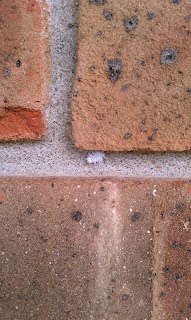 Anyone know what this critter is?  And if its harmful to plants?


EDIT: So, through the magic of Twitter, we've discovered that the odd white bug is actually the larval form of a ladybird beetle, a predatory beetle much like the ladybug.  They are also known as Mealybug Destroyers, because they eat the harmful mealybugs that like to munch on your plants. (They also look much like their prey; mealybugs are white and furry, too.)