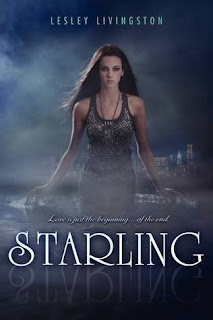 Today I have the great pleasure of being a part of Leslie Livingston's blog tour for her new book, STARLING.  When asked what kind of post I wanted to do, I instantly jumped at the chance to interview the two main characters, Mason Starling and Fennrys Wolf.  I read STARLING, loved it, and had a few particularly burning questions I wanted to ask our two heroes.  Especially how Fennrys...well...I'll just let you read the interview.  *Evil author grin*  (I will do that a lot.)

So, anyway, here we go!  On with the interview.


1.  So, Fennrys, tell us a bit about yourself.  I heard you...um...sort of fell into Mason's life in the most interesting way.  Care to tell us about that night?  *Evil grin*


I’d say it was a pretty normal night, really… Plummeting out of the sky into a maelstrom of apocalyptic weather, blackouts, storm zombies, abundant weapons-use, death, destruction, beautiful girl with a sword… hey. It’s NYC. Hell of a town, right? What… that’s not what you’re talking about? Is it the amnesia thing? The fact that I can’t really tell you who I am or where I came from? Or the fact that I can’t tell you because I don’t remember… and I don’t have any ID to help with that because I had nowhere to carry a wallet. On account of my lack of pants that night. Is that what your getting at, Ms. Kagawa? *Dangerous grin*,


2.  The pants part, or lack thereof, definitely.  *Smiles back at Fenn*  Mason, you have two older brothers and a very protective father.  Being the only girl in your family, what is your relationship like with them?  Do you get along with your brothers, or do they drive you crazy?


Wow. Uh… both. The getting-along and the crazy-driving. I’m not going to say which goes with which, because that’s just not nice, but then… neither is one of my brothers. And you didn’t hear that from me. As for my dad? He’s kind of a force of nature. He’s pretty amazing, really, and I think I grew up trying to make him proud, and learn from his strength. I know I’m the only girl in the house and, yeah, sometimes it seems like there’s a fog of testosterone hanging in the air, but I can pretty much hold my own. But really, the Starling men are manly men. What are you gonna do? It’s probably one of the reasons I learned to fight.


3.  Fennrys, you've just come back to the mortal world after being away for a long time.  What's your favorite part about it?  Is there anything you love that wasn't around before?


Seeing as how I don’t really remember all that much about the world the first time around… I’m not exactly sure how to answer that. Except… you write books about the Fae, don’t you, Ms. Kagawa? Something about that seems… familiar to me. I dunno. I’m probably just imagining things, right?


My favorite part about the world now? It’s probably the same thing that I love—er… am extremely fond of that wasn’t here before. She’s sitting over there. But I’d rather you didn’t tell her I said that. I’m trying not to screw this thing up, you know?


4.  Mason, how did you first get into fencing?  Is it something you've always wanted to do?  What do you enjoy the most about the sport?


I’m not really sure how to explain it. All I know is, the very first time I ever picked up a sword, it just seemed absolutely… right. Like my hand had been waiting for it. I fight saber in competition and it’s definitely the most fun. The moves are bold and fierce and there’s a lot more yelling from the competitors. I think my dad worries sometimes that I’m a little obsessive about my practice. I think he’d like me to take up another hobby. I haven’t told him yet that I kind of have. Mostly because my new “hobby” still involves fighting. Just with more monsters, bigger swords and occasional moonlight and kissing added in. Um. *Blush*


5.  And finally, Fennrys, what do you think of Mason?  Any quirks or habits that drive you crazy?  What do you like most about her?  And Mason, same question.  What exactly are your thoughts on Fennrys?  (Feel free to spill juicy details if you like.  We'd all love that. *Evil author grin*)


I think Mason is… special. That’s what I think. I’m not really keen on her whole flinging herself into the path of danger impulses, but I’m certainly not going to try to curtail them—mostly because that would mean the first thing she’d have to do is stop hanging around me. Quirks? Sure. There’s the whole open window/ no enclosed spaces thing. But I like fresh air, so I’m okay with that. Habits that drive me crazy? She lifts her shoulder too much when she lunges and she clenches her toes on a thrust. We’re working on that—what? You’re doing that grin thing again, Ms. Kagawa. I’m talking about Mason’s fencing technique. Surely that’s what you thought I was talking about… right? *Evil Fennrys grin*

Well… I like the way he grins… And fights. And… uh… stuff. I like the fact that he treats me like an equal and that he’s not afraid to not hold back when we spar. The whole flinging himself into the path of danger thing is a little worrying. And the fact that, y’know, he doesn’t really know who he is. That’s a quirk, right? I think that’s a quirk. Habits that drive me crazy? The way he smiles. It’s not quite the same as the grin. It’s like, every time he does it… it’s for the very first time, and he’s not really sure how to make the muscles of his face be happy. But then this smile appears and it’s awkward and beautiful and it definitely makes me crazy—wait. I’m not sure we’re talking about the same kind of crazy… *Attempts evil Mason grin… winds up just blushing furiously*
Thank you, Mason and Fennrys, for dropping by.  I think we all enjoyed that peek into you...er...characters!  I was going to say characters, geez you people. :P  Be sure to check out STARLING, on shelves now.  You won't regret it.
Julie
Posted by Julie Kagawa at 8:33 AM