The new covers for The Eternity Cure and The Immortal Rules were revealed last week. 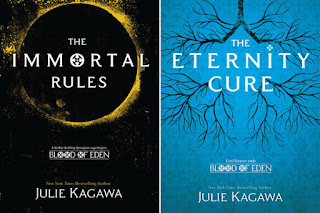 And while many liked the new look, there have been questions over why the covers were changed in the middle of the series, and why the designers went with a completely new look than the original cover.


1.  The absence of dystopian:  During teen panel polls about a new cover, it came to light that no one who saw the original Immortal Rules cover thought it was dystopian.  That the only message they received from looking at the cover was "vampire."  And since the Blood of Eden series is very much a dystopian as well as a vampire story, the designers wanted to shift the focus of the cover to portray a dystopian series instead of purely vampire.

2. Majority rules: After several new cover concepts were designed, a number of polls were held with teen readers to find out which cover they liked best.  The overwhelming majority chose the new covers, both for their looks, and because they accurately represented the dystopian feel of the book, according to the core audience.

3. Whitewashing controversy: After The Immortal Rules was published, readers began to express concern that the main heroine Allison Sekemoto, who was of Asian descent in the story, was not represented correctly on the cover.  That the girl on the cover of The Immortal Rules and in the Blood of Eden website was Anglo-European, and clearly not Japanese.  Harlequin Teen heard reader's concerns, took them to heart and decided to re-vamp (no pun intended) the entire series to accurately portray both Allison and the content within.  Also, a new cover model was chosen, one who correctly represents Allie, and will either appear on the back of the cover, or on the inside flap.

So you see, the decision to re-create the series' look was not made lightly, and was done with as much audience participation as possible.  We hope that you like the new covers and, even though the change happened in the middle of the series, understand the reasons behind it.


“In The Eternity Cure, new vampire Allison Sekemoto has come to terms with what she is and what she must do to survive: prey on humans. She knows she is a vampire, but she is determined not to become a monster. But then she meets someone who challenges that belief, telling her all vampires are killers, encouraging her to embrace her savage instincts. And as she gets closer to rescuing Kanin, the lines between human and monster blur even further, and Allison must decide to either cling to her rapidly fading humanity, or succumb to the darkness within."