The cover for Blood of Eden #3, THE FOREVER SONG:


Ready for the pretties? 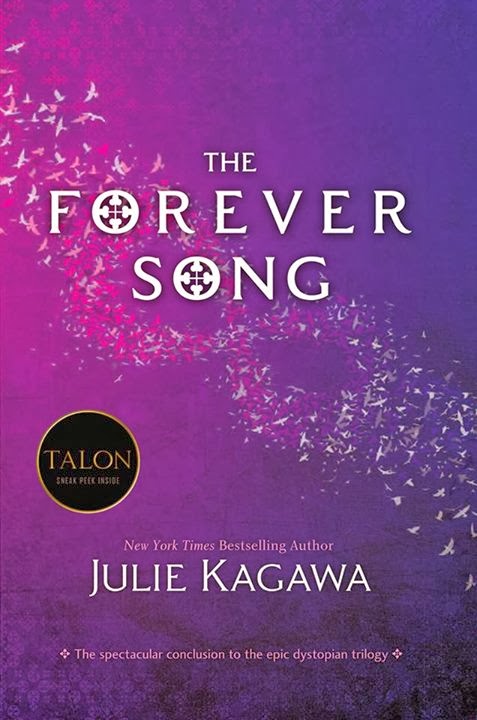 Pretty, isn't it?  I love the infinity symbol in the center.  Also, do you see what that little black circle says?  So if you do get a hold of this, there is a sneak peek of TALON inside.  Yay, dragons!

The smell of blood grew thicker once we were past the wall, though nothing moved on the narrow path that snaked between houses.  The flimsy wood and tin shanties were silent, dark, as we ventured deeper, passing snow covered porches and empty chairs.  Everything looked intact, undisturbed.  There were no bodies.  No corpses mutilated in their beds, no blood spattered over the walls of the few homes we ducked into.  There weren't even any dead animals in the tiny, trampled pasture past the main strip.  Just snow, and dark, and emptiness.
And yet, the smell of blood soaked this place, hanging thick on the air, making my stomach ache and the Hunger roar to life.  I bit it down, clenching my jaw to keep from snarling in frustration.  It had been too long.  I needed food.  The scent of blood was driving me crazy, and the fact that there were no humans here made me furious.  Where were they?  It wasn't possible that an entire outpost of mortals would up and disappear without a trace.
And then, as we followed the path around the pasture and up to the huge barn at the top of the rise, we found the townspeople.
A massive, barren tree stood beside the barn, twisted branches clawing at the sky.  They creaked and swayed beneath the weight of dozens of bodies, hanging upside down from ropes tied to the limbs.  Men, women, even a few kids, swinging in the breeze, dangling arms stiff and white.  Their throats had been cut, and the base of the tree was stained black, the blood spilled and wasted in the snow.  But the smell nearly knocked me over regardless, and I clenched my fists, the Hunger raking my insides with fiery talons.
"Well," Jackal muttered, crossing his arms and gazing up at the tree, "isn't that festive."  His voice was tight, as if he too, was on the edge of losing it.  "I'm guessing this is the reason we haven't found a single bloodbag from here all the way back to New Covington."  He growled, shaking his head, lips curling back from his fangs.  "This guy is really starting to piss me off."
I swallowed the Hunger, trying to focus through the gnawing ache.  "Why James, don't tell me you feel sorry for the walking meatsacks," I taunted, because sometimes, goading Jackal was the only thing that kept my mind off everything else.  He snorted and rolled his eyes.
"No, sister, I'm annoyed because they don't have the decency to be alive so I can eat them."

P.S. "I" cried while writing parts of this book.  Especially...well, you'll know it when you read it. #EvilAuthor #YourTearsFeedMyMuse