Monday Musings: A tribute to Sage


I received an email from a reader who sent me this gorgeous fan art of the three sons of Mab: Sage, Ash, and Rowan.  It is such a beautiful piece that I had to share. 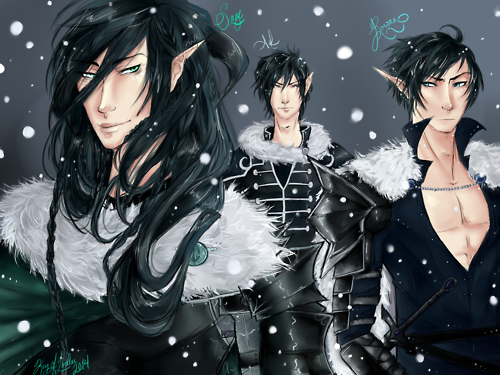 The artist also mentioned that her favorite character in the Iron Fey series is Sage, and that she was heartbroken when he was killed.  She asked that, if I ever had the time, to write a small piece about Sage and put it on my blog for everyone to enjoy.  Since she shared her beautiful artwork with me, I think that is only fair.


Sage was the eldest of the three sons of Mab, the queen of the Winter Court.  Like his two younger brothers, Rowan and Ash, Sage was tall--taller than either of his siblings--and possessed the unnatural grace and beauty of all his kind.  His long, inky black hair was either tied behind him or left unbound to ripple in the wind.  He had narrow, elegant features and jade green eyes like chips of ice.

Like Ash and Rowan, Sage was a powerful prince of the Unseelie court, able to wield Winter glamour to control snow, ice, and cold.  As the eldest of the three, Sage was heir to the Unseelie throne, and though the likelihood of  Mab ever relinquishing her throne was nearly non-existent, Sage still carried the burden of being next in line to rule.  This responsibility weighed heavily on him, making him aloof and distant from his brothers.  Unlike Rowan, who reveled in the cruel, often dangerous political games, and Ash, who disdained the court and everything in it, Sage took a more pragmatic approach to the politics of the Unseelie.  He played the game not for pleasure or spite, but to solidify his position as the eldest prince of Winter.

His relationship with his two siblings was one of cautious respect.  Sage knew, as heir to the throne, his brothers were his greatest competition for Mab's favor.  Particularly Rowan, whose cruelty was matched only by his lust for power, and whose deadly games required even a Winter prince to tread very cautiously and watch his back.  Sage's  relationship with his youngest brother, Ash, was much less guarded, particularly before Ash met Ariella.  However, after Ariella's death, a bitter enmity began between Ash and Rowan, and Sage distanced himself from his two warring siblings so as not to be caught in their silent but intense battles.

Unbeknownst to everyone, Sage longed to be free of the Winter Court.  He had grown tired of the constant maneuvering and power plays, and knew Mab would not relinquish her throne, leaving him forever locked into his position: an heir that would never be king.  Still, he was far too loyal to abandon his court, and knew he would be a prince of Winter to the end.  His final act was bravely defending Meghan Chase, the Summer Princess, from  the Iron assassins Rowan had let into the castle.  He died fighting, as a true son of Winter should.  And though he would never know it, his death was greatly grieved, both by his mother, Queen Mab, and by Ash, the brother who had always admired him.

And perhaps, by scores of readers like the one above, who was inspired enough to immortalize him in a picture.  So that, even though the eldest prince of Winter is gone, he will never truly die.

I think he would be pleased.


"Belief, worship, imagination--we were born from the dreams and fears of mortals, and if we are remembered, even in some small way, we will always exist."