A (Spoiler-free) chat about Ash

So. With The Iron Knight out on Netgalley, and Ash's story already in the wild, I thought I would post my very brief (spoiler-free) thoughts about the dark, broody prince, and the expectations that might be floating around. 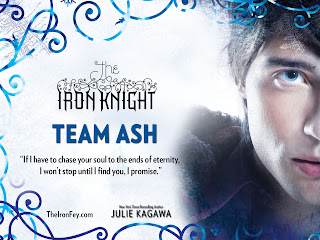 It's always a gamble writing a book in the POV of an already established character, especially one who has been seen through the eyes of someone else. We see the character as the protagonist sees them; we don't know their thoughts, their feelings, the dark, ugly traits that they keep hidden from everyone else. And if the protagonist happens to be in love with said character, things get even more muddied.

Getting into their head is another matter entirely.

Case in point. Its a common occurrence; when an actor is chosen to play the role of a particular character in a book, everyone always says: "he looks nothing like him," or "that's not how I imagined him at all." This is because we've built up our own image of the character, through traits, character description, and our own preferences. And everyone has a different image in mind. Its impossible to meet everyone's expectations.

The same can be said of a book character.

As I said before, it was a gamble switching to Ash's POV. Before, readers have only seen him as Meghan does: handsome, brooding, protective, dangerous, devoted. But in The Iron Knight, we meet the real Ash, stripped of his air of mystery, his real thoughts and emotions laid bare. It might surprise some people. It might anger some people. To know the Ash they built up in their head is quite different then the real Ash. The Winter prince is not an emotionless automaton: he has fears and insecurities like everyone else. He has also lived a long time, and his past has not been a pleasant one. There are old wounds, scars, past sorrows, and regret. To give him his own story means there are no illusions anymore; this is Ash at his darkest, most intimate level. He might not be what you expected.

I will promise one thing, though. The prince of the Unseelie Court has always been my favorite, and I tried to portray him as honestly as I could. Writing his story was difficult sometimes, because I had to dig deep into Ash and bring all these things to light. But I can say with utter confidence that I regret nothing in Ash's story, and to the readers who love the Winter prince as much as me, this one is for you.

I'd love to hear your thoughts/predictions/expectations. (Though I will answer no spoiler-ish questions about The Iron Knight. The gremlins will eat me if I do.)
Posted by Julie Kagawa at 8:27 AM