I know I've had a lot of NEWS to reveal lately, but I think this might be the most exciting yet.

You know that new series that got picked up by HarlequinTEEN?  The one that isn't written, or even titled yet?

It just got picked up by this little company called Universal Pictures. 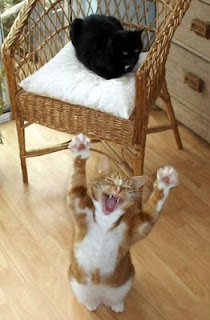 Yep!  A MOVIE option!  From Universal!  In fact, this is what Hollywood Reporter said today:

Chris Morgan, the writer of the "Fast & Furious" franchise, is on board to produce.

The supernatural story is set in a present-day coastal town where mythical creatures hide amongst us cloaked as humans. Slayers belonging to an order that dates back to St. George infiltrate the town disguised as out-of-town kids, setting up a confrontation and, as is the case with YA books, a love triangle.

The 104-page proposal was described as strong in execution. The deal went down late Thursday.
Harlequin TEEN-- in a seven-figure, five-book deal -- picked up book rights in January for its young-adult imprint. The first book is to be released in 2015.

Kagawa is a big name in the YA fantasy world. The Kentucky-based author is behind the fantasy series The Iron Fey, set in the realm of faeries, and Blood of Eden, a fairly new series centering on vampires set in a postapocalyptic future.

Morgan, who has a first-look producing deal with Universal, is best known as the writer of the studio’s Fast & Furious franchise and has Fast & Furious 6 opening May 24. He also wrote 47 Ronin, the Keanu Reeves samurai movie that opens Dec. 25. Chris Morgan Productions is also producing The Legend of Conan for the studio.


So yes, that is my uber exciting news!  What do you think?  And I'd love to hear your guesses as to what these mythological creatures are.  (Though I can say nothing yet, no hints or spoilers, sorry.)

A MAJOR thank you to all my readers and fans.  It's because of you that this could happen, and I'm so grateful for all your support!  And so excited for what is to come.