This is my rant where I sing the praises of a video game instead of a book. Because, while I love books in all their bookish glory, there's something so fulfilling about actually getting to control the protaganist's actions. Therefore, when said hero acts like a twit or gets his/herself into trouble, you can at least try to rectify the situation, instead of screaming "Don't do that, you moron!" at the pages of a book, as if the hero will suddenly hear the voice of God shrieking at them from somewhere overhead and do something sensible. I realize this is why I became an author: I might have a bit of a god complex and it frustrates me to no end when I can't reach into the pages of the book and give the protaganist a good smack upside the head for being stupid.

Anyway, moving on. This week's game of choice: Borderlands. 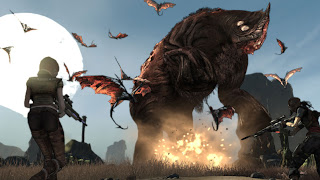 Borderlands is a first person shooter that combines the elements of an RPG. Think Fallout 3 meets Oblivion. I could go on about the cool cell-shaded technology and the leveling system and the online four person storymode, but all you need to know is that the game kicks @$$. There's no complex plot, no having to rescue your sibling/child/significant other, no having to save a kingdom from an evil demon sorceror. Here is the extent of the plot: you're a fortune hunter; kill stuff, get loot, level up. And there's something thrown in about some lost alien technology and a mysterious vault somewhere on the planet, but again, you're looking for it cause you're a treasure hunter and nothing else.

The game is obviously visually gorgeous. As for the heroes themselves, you get to choose from four fairly typical arctypes: soldier, sniper, brick, and sexy female. The Wasteland planet is huge, and filled bandits, alien life, and all sorts of persistantly aggressive bad guys that you get to shoot. And to help you with this, there are literally millions of guns; sniper rifles, pistols, shotguns, revolvers, you name it. You recieve quests from the planet's eccentric settlers, or from the job board in the middle of town, and quests are basically "go here, kill stuff," or "go here, collect stuff, kill stuff," very much like an MMO. Quests are segregated by level, and you'd better be the level they suggest, otherwise you will get an important part of your body handed to you on a platter. Make no mistake; you will die, and die often, but there are handy spawning points scattered throughout the land, AND baddies don't respawn health or friends if you're killed, so you can literally keep coming back to pick away at them until they die. 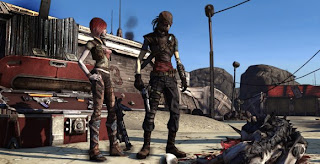 And, much like an MMO, this game is addicting. My husband and I played it together (another reason I love it; splitscreen!) for five hours last night and barely noticed the time until it was two in the morning. I recommend it to any hard-core gamer, or anyone looking for a violent, fun, free for all. And anyone who tells me violent video games make people more violent better shut up or I'll kill them. :P
Posted by Julie Kagawa at 10:35 AM