I haven't done a video game post in awhile. Well, mostly because I've been playing the same two games, Dragon Age Origins and Assassin's Creed II, over and over again. Both completely awesome games that I highly recommend. I haven't even gone back to Final Fantasy 13, sad as that is. I will get to it someday, but for now, there are just too many good games to slog through a "meh" one.

Which brings me to this. 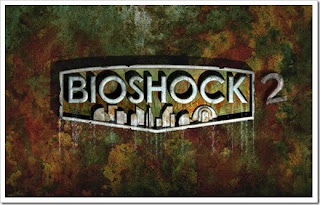 I loved the first Bioshock. Loved loved loved it. It was innovative, it was unique, it was spooky and engaging and pretty as heck. It won Game of the Year for good reason. For those of you that don't know the plot, your (the hero's) plane crashes in the middle of the ocean, and you discover an entire city on the bottom of the sea floor. "Rapture" was the brainchild of one Andrew Ryan, a visionary who dreamed of a place where god and government could not touch, where people could be exactly what they wanted without fear of "the Parasite" taking it all away. In Rapture, scientists invented something called "Adam," which allowed you to rewrite your genetic structure to make you prettier, smarter, and oh yeah, it also gave you super powers like telekinesis and the ability to hurl lightning from your hands. Everyone could be beautiful. Everyone could be a god. Sounds like a paradise, right?

When you get to Rapture, its pretty clear things have gone batsh*t crazy. The city is in ruins, and all the people have gone off the deep end due to an unforeseen Adam addiction. Its like being locked in a loony bin at the bottom of the sea. As you make your way through the city, staring at the ocean floor through cracked and leaking glass, you have to uncover the city's past, track down the elusive Andrew Ryan who lectures and threatens you over the PA system, and choose either to kill or save these creepy little girls called Little Sisters who scurry around Rapture guarded by their fanatically protective Big Daddies.

(Yes, you had to fight those things. It involved a lot of running and screaming.) 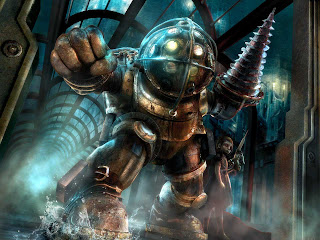 I won't get into details, but at the end you will, depending on your choices, leave Rapture with all the Little Sisters you saved, or become its new leader after taking care of Ryan (I think, as I haven't played through the "evil" storyline). But, in conclusion, it was an awesome game and I think I've yammered on about it long enough.

So, Bioshock II. I was hoping it would live up to its predecessor and so far its meeting all my expectations. Ten years have passed since the events of the first, and a new evil has arisen in the dark, corroded halls of Rapture. You begin play not as a trapped human, but as a Big Daddy, one of the first Big Daddies ever created. Someone is stealing human girls from the surface and turning them into Little Sisters, continuing the horrible experiments from ten years ago. Rapture has a new faceless menace in Sophia Lamb, the scientist creating these demon children, and its up to you to save or slaughter the Little Sisters in a quest to find your own adopted "daughter."

Everything I loved in the first game is back, though I do have one minor quibble, and that is the fragility of the main character. You're a freaking BIG DADDY, yet three bullets from a gun or a few whacks with a lead pipe, and you're out for the count. Considering you sometimes have three, four, five baddies coming at you at once, I would think a Big Daddy would be a little more resilient.

Still, its a small thing, and doesn't retract from the overall awesomeness of the game. I probably won't be seen very much the next few days; I'll be deep under the ocean, fighting for the future of Rapture and a horde of creepy little girls. Wish me luck. ;)
Posted by Julie Kagawa at 10:47 AM