Cross posted at The Page Flipper

Just so you all know, Chelsea at The Page Flipper is doing a Buffy week on her blog. A BUFFY week! (Picture me dancing in joy) So, when she asked for guest posters, I immediately jumped up and down and flapped my arms. Below you will find my contribution to the Week of Awesomeness, where I talk about my two favorite characters in the series. Of course, I'm talking about Angel and Spike. (Hm, a dark brooding anit-hero and a smart-ass; why does that sound so familiar?) 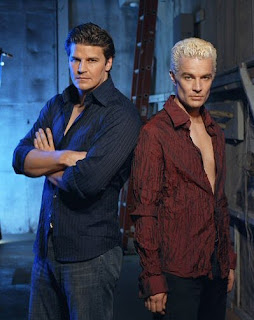 I adore the Buffy series. Love it. I don’t think there is another series that could make me laugh, cry, scream, giggle hysterically, or drive me crazy like Buffy the Vampire Slayer. Of course, for me, the characters made the show. And two of my favorite characters were the two awesome, testosterone-filled vampires in Buffy’s life: Angel and Spike.

So, who is the best vampire?

Well, let’s examine the questions and answers below. A reminder, these are only my opinions. With such a volatile subject as this, I’m sure there will be many who violently disagree with me. And that’s cool. I’m certainly not the guru of Buffy the Vampire Slayer. But please refrain from breaking out the torches and pitchforks. ;)

Who is more bad-ass?

Tough question. I think it depends on where they are in the series. For instance, in season 5, when Spike was captured and had that chip stuck in his head, he was pretty much a pansy through the whole season. Both vamps have their bad-ass moments, but I think I have to give it to Angel. Yes, Spike is a great fighter and could give Angel a run for his money, but Angel doesn’t need to show off his bad-assiness; he just is. The only exception to this is when Angel becomes Angelus. There is no bigger bad-ass in Buffy history then when Angelus comes sauntering in. Now that is one scary vampire. Gives me shivers.

Spike, hands down. Does that surprise you? Let me explain. Angel may have that tortured, seeking redemption thing down pat, but his soul was forced on him because of the curse. He had no choice but to become moral. Spike, on the other hand, went looking for his soul and fought to get it back. He showed genuine remorse even before he found his soul. He truly comes to love Buffy, and in the end, it’s Spike, not Angel, who does the Ultimate Noble Sacrifice thing, giving his own life to save everyone. There is nothing nobler then that.

Who is the better fighter?

It might be a contradiction, considering the first question, but I think Spike is the better fighter, simply because he enjoys it. He’s the one I’d rather have guarding my back, because he isn’t at all hesitant about hurting people, whereas Angel might balk at hitting a girl, ect. While Angel fights because he has to, Spike joyfully flings himself into a fray, making him the better fighter. 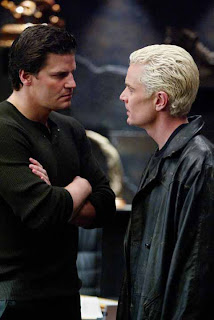 Who is more evil?

This one goes to Angel. Or, more accurately, Angelus. Yes, when evil Spike blows into town, its bad news, but when Angelus makes an appearance, people die. Who can forget that scene with Giles girlfriend? (I forgot her name, bad Buffy fan!) Spike will beat you up and bite you and maybe kill you, but Angelus tortures people, mentally as well as physically, and he enjoys it. A true sadist, which is why the title of Most Evil Buffy Vampire goes to Angelus.

Another tough question. And one that can’t really be answered. Both boys are sexy in different ways. The dark, tortured, brooding Angel, and Spike with his smart-ass, bad boy persona. Spike can sing, and Angel looks amazing without a shirt. I think personal preference wins this one. And personally, I’d take them both. ;)

Who has the best moment?

They both have so many awesome moments. Spike singing (my favorite episode!), Angel turning evil, but for me, I think Spike’s final moment in the last season will forever stand out in my mind. His last words: “I get to see the end,” made me sob, and completed his awesome, touching character arc. (Though I will say, I was delighted to see him return in Angel.) 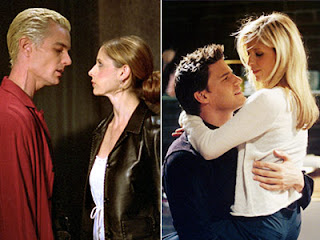 So who is the best vampire?

I don’t think there’s an answer to this. This is one of those questions that will have fans splitting into Team Angel and Team Spike (Ahhhh, more teams!). So I will simply leave you to answer/debate this on your own. Who do YOU think is the best vampire? (I have my favorite, but I’m not saying. :P )
Posted by Julie Kagawa at 10:11 AM